It’s no secret that the social media platform that we all love to hate (but also can’t stay the hell off of for any length of time) has had some… well, let’s just say “issues” lately.

From their failure to address harassment complaints (not to mention actual death and rape threats) while censoring and banning people for arbitrary comments (specifically and most commonly that humans of the non-female variety belong in the refuse bin), to the ridiculous hypocrisy between full frontal male nudity and a glimpse of female areola, Facebook has been problematic, to put it generously, for some time now. But, last week, they jumped the goddamned shark face first into a steaming pile of what in the actual fuck is going on right now.

WARNING: The following story contains photos of plastic baby doll cake decorations that some people (and Facebook autobots) may find disturbing. Scroll downward at your own risk. I’d hate for your sensitive eyes to become seared with images you can’t unsee that may haunt your dreams and forever tarnish your Facebook experience, which could very well keep you from living your best life.

Now that we’ve gotten that out of the way, please follow me closely here, because this is not a story from The Onion or The Beaverton. This shit really happened.

There is a website and Facebook business page called King Cake Snob dedicated to annually ranking and rating king cakes in the New Orleans area for Mardi Gras. For those not in the know, king cakes are a staple of Mardi Gras tradition. It’s a delicious cake baked with a small plastic baby doll inside it. What happens if you get a slice with the baby in it is up for debate, but that’s neither here nor there. What matters is that it is a time-honored tradition going back more lifetimes than we can count, and the competition for who makes the best one in NOLA is fierce. Participants submit photos and descriptions of Mardi Gras’ go-to dessert, and winners are ultimately chosen in categories like “Best Traditional King Cake,” “Best Filled King Cake,” and “Best Freshness.”

On January 7, 2019, the admins of their Facebook page posted a photo and blurb to announce the start of the season — and to encourage even more participation, they created an ad boost campaign to pay for a larger reach. They submitted materials to Facebook for review and went on about their merry business.

According to King Cake Snob’s blog post, “despite the seemingly innocent and festive nature of the post, it was still too risqué for Facebook ad screeners, who swiftly pulled the ad for ‘excessive nudity.’ Facebook suggested King Cake Snob remove any images or video that contain nudity, and instead, use content that focuses more clearly on the organization’s product or service.”

King Cake Snob spokeswoman Beth Harris said, “We were completely shocked. We walked around the office saying ‘Nobody’s going to believe this.’”

King Cake Snob tried to appeal the decision, pointing out that the nude plastic dolls weren’t actual naked human babies, but Facebook wasn’t having it.

“We are shocked that Facebook would censor the king cake baby, one of the quintessential traditions of the Mardi Gras culture,” Jay Connaughton, managing partner of Innovative Advertising, the creators of King Cake Snob, said. “Obviously the folks at Facebook have never tasted the sweet deliciousness of a traditional or filled King Cake. If they had, they would understand the deep passion that runs in Louisiana for King Cakes of all varieties, and the little babies that live inside them.”

Andrew Alexander, a spokesman for King Cake Snob, says that they also asked Facebook for a second review but were denied again. Additionally, they’ve submitting images where the offending body parts were blurred or blacked out. Those have also been denied, according to Alexander.

Alexander said they are still able to post the images on the Facebook page, just not through paid advertising. 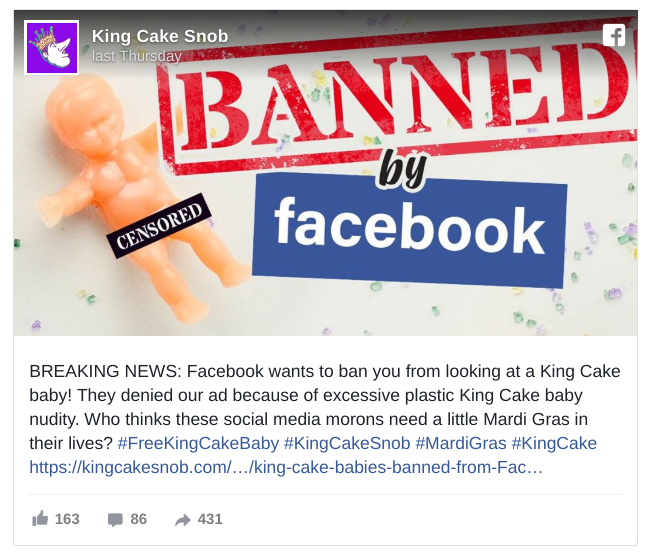 “It’s just wild,” Alexander said. “It’s been interesting to see people talking in the comments about the other stuff they have seen on social media. It’s kind of interesting how it’s being policed. We’ve blurred it, we’ve censored it, we’ve done things to try to make it more Facebook-friendly. It’s kind of mind-boggling.”

Mind-boggling is one way to put it.

Another would be that it is goddam ridiculous.

I mean, you want to laugh because of the absurdity, but at the same time, Alex fucking ‘crisis actors’ Jones is back on Facebook free to spew his hateful bile and we can’t have pictures of a fucking King Cake?

Don’t get me wrong, I am EVER so glad that someone in Facebook admin land has put on their super hero cape to defend the modesty of poor little plastic pastry infants, but I think you’ve got bigger fish to fry, frankly.