Stop me if you’ve heard this one. A person who was in no actual need of police assistance called 911 on another human person who has the right to exist in public spaces without being harassed. The police came, and a black man who did nothing wrong was asked to leave.

The only way this story differs from the countless (and I do mean countless) others is that he was asked to leave and he did so without incident. At the end of this encounter, no one was arrested, assaulted, tased, shot, or dead. That doesn’t mean that this situation is any less deserving of our media attention, but you wouldn’t know that to scroll through your social media of choice. It was overshadowed by the latest dumpster fire coming out of the White House, so you may not have heard all the deets.

Byron Ragland is the black man at the center of this latest white people 911 incident. A US Air Force veteran, he currently works as a court-appointed special advocate and a visitation supervisor, which means he supervises meetings between children and parents who do not have custody. At the time of the incident, Ragland was supervising a visit with a mother and her 12-year-old son.

To be clear, let me say that again: His business at this store was doing his court-appointed JOB of supervising an outing between a mother and her 12-year-old son. The little boy wanted ice cream, so they went to Menchie’s Frozen Yogurt.

Mr. Ragland tells KIRO 7’s Deborah Horne that no one from the shop ever spoke to him directly, but within about a half an hour, two police officers appeared in front of him.

“Pretty much I look up, and these two police officers [are] standing in front [of me]. They asked me to leave,” Ragland said. “They asked for my ID. They told me the manager had been watching me and wanted me to move along.”

Ragland said he explained he was working, and that his client backed him up. “She reassured them ‘Oh, he’s with us, he’s working. What’s going on?’”

The police report reflects that the Kirkland officers were told he was legally required to be there supervising the visit between mother and son. “Ragland had two associates (female adult and male juvenile) with him, who stated they were there with him for visitation,” the report says. He was asked to leave anyway, and he did without incident. 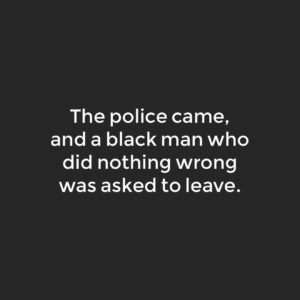 A portion of the 911 call shows Ramon Cruz, the store owner, who was not on premises at the time, told the dispatcher, “My staff just called me, and I’m looking at the camera, and there’s one guy who has been sitting at the corner, hasn’t bought anything. He’s been sitting there for over 30 minutes.” He adds, “They’re kind of scared because he looks suspicious. He just keeps looking at the phone and looking at them.”

And who were the two employees who contacted their boss in such a panic over a black man sitting quietly? I’ll give you three guesses and the first two don’t count.

Hold on to your hats for this shocking revelation: Two white women.

Meanwhile, Cruz told the dispatcher that the store has had problems recently with “the homeless shooting drugs in the bathroom,” and also a robbery. So, I mean, obviously, this means no black people are allowed to sit in the dining area, because who even knows what they might get up to if they aren’t spooning frozen yogurt down their gullet.

And even after the officers are plainly and clearly and calmly told by Ragland AND the woman he was supervising that the three are together and having a supervised parental visit, he is still asked to leave.

“You listen to that 911 call. He says right in there that I’m not doing anything,” Ragland said of the 911 call. “But that’s all it takes in America — for you to be black, and to be somewhere you’re not supposed to be. And where you’re supposed to be is not up to you. It’s up to somebody else’s opinion.”

Ragland says the Philadelphia Starbucks incident flashed through his mind when the officers approached him in Menchie’s, and not wanting to be arrested, he complied and left.

“You want to stand up for yourself, as a man, or as someone who was just doing his job, and say ‘hey, this isn’t right,’ ” he said. “But in the moment I’m thinking I’m a black man, and if I start emoting, I might not walk out of here. And so you rationalize to yourself. What’s the big deal, it’s just Menchie’s, just leave. But then later, you realize that you gave in — that you consented that this is the way it’s going to be, to always be.”

“Living this kind of mental life will drive a person insane,” he added.

“How would you feel hearing that you made people so scared and uncomfortable that they called the police?” he said. “For me, that’s just Wednesday. I try not to let it consume me. But it’s hard not to conclude that I walk around in a certain skin, and that’s all that matters.”

Protests after the incident eventually led the owner to publicly apologize and state that employees will undergo implicit bias training. The Kirkland police department has also apologized, and launched an internal investigation of their own. Additionally, the City Manager has apologized and says they will include members of the City Council in the training. Meanwhile, the two officers who responded remain on patrol.

It appears for the moment that Mr. Ragland may get his wish. Whether it results in any meaningful changes, or just ends up being more lip service, remains to be seen.